“Between Light and Shadow” – The Music of Twilight Symphony

First off, I think it’s only appropriate that I tell you that while I am a Zelda fan, I’m not a crazy Zelda fan. A Link to the Past and Link’s Awakening are two of my all time favorite games, but I must admit, I’ve not kept up with the series as I should have. I sadly did not get to play either The Wind Waker or Twilight Princess because I didn’t own a GameCube or Wii. (Although I did borrow my parent’s Wii for Skyward Sword). This glimpse into Twilight Symphony is coming from the viewpoint of someone who has listened to film and game music all his life, who is a Gamer (free time to play being my great enemy!), and one of the video editors for Symphony of the Goddesses.

Twilight Symphony is not simply a “reorchestration” of the original score for Twilight Princess. I think it would be better to call it a complete “reimagining.”  It not only keeps true to what Toru Minegishi, Asuka Ota and Koji Kondo composed for the game, but it offers something that I think really sets it apart from other “fan projects” over the last decade. Score elements and thematic devices have been tightened or expanded to fit the cinematic approach that the score has. The Zelda Reorchestrated Team has taken great care to make sure that all 51 tracks function as both a listening and emotional experience. There’s a lot of detail to be heard throughout the score and I suspect fans will be picking tracks apart for a long time. This is something you need to play loud to get all the information they’ve packed into these tracks,

One of the aspects that makes Twilight Symphony unique is the level of mastery on the blending of both sampled and live elements using players and a choir. The final result is something akin to Final Fantasy XIII or the more recent, Kid Icarus: Uprising. There are times when I had to remind myself that Twilight Symphony was not the official soundtrack. Yes, it’s that good. Speaking of live players, while some of the soloists have wished to remain anonymous, these players are all names you probably already know from YouTube and other AAA video game titles. They are all masters of their craft and Zelda Reorchestrated had the great foresight to get them involved: Aubrey Ashburn (Dragon Age / Devil May Cry series), David “Docjazz4” Ramos, Marc Papeghin, Jake “jam2995” McCoy, Kyle Landry, and Jeff Ball to name a few.

All of these 51 tracks are fantastic, but if I were to talk about all of them, you’d be reading for a long time! So I’m going to select tracks that stand out to me for one reason or another. Kicking right off with disc 1, track 1, “Overture,” you’ll quickly realize that it’s not business as usual for this album. The samples mix beautifully with Ashburn’s vocal performance, Tim Davis’ choir, and Papeghin’s french horn. This track quickly establishes the tone for the rest of the album. It takes the listener on those first steps toward a longer journey. “Ordon Village” and “Ordon Ranch,” while early in the album, are two of my favorite cues. Ramos, Papeghin, McCoy and Davis’ choir give tracks 3 and 4 some much added weight and the result is fantastic. Both of these tracks convey a great sense of fragility while at the same time, balancing an epic nature of orchestral depth. “Midna’s Theme.” One of the previews that was posted during the choir sessions, you finally get to hear it in all its glory. The choir adds a huge sense of weight for the character, which of course plays to who she really is, Princess of the Twilight Realm. The theme is fuller and expanded by piano, live strings and french horn. It’s simply beautiful. “Hyrule Field” as you’ve never heard it before. Here we get a fully bombastic performance of the theme in this swashbuckling action packed rendition.

Onward to disc 2 and “Rutela’s Wish.” Kyle Landry’s absolutely heartbreaking performance of Queen Rutela’s theme (Ocarina of Time’s ‘Serenade of Water’) as well as the traditional Zora’s Domain. Gets me misty every time. The crispness of the piano is flawless, and you’d think you were sitting in a seat at a symphony performance. This cue is just awesome. Next, “Ralis, Prince of the Zoras.” Another heartbreaking rendition awaits. A somber, yet powerful track that calls on the talents of a live oboe player. Light bells grace this cue making it that much more emotional. You might need tissues for these two pieces. The later part of the track incorporates the wonderful “Calm and Hope” melody. “Midna’s Lament” once again features Landry on piano. This touching performance only amps up the emotion. Really amazing. On to track 7, and one of the most grand renditions of “Zelda’s Theme.” You already know the tune, but crank this one up, your neighbors should be yelling to turn it down. Choir and live players show their might as the track slowly builds to a powerful crescendo. Moving right along to “Sacred Grove” once again showcases the talents of Ramos and Papeghin, giving us a great performance of the “Lost Woods” theme. “Hyrulean Odd Jobs” was arranged by Braxton “Skotein” Burks over at Pokémon Reorchestrated and if you don’t know him, you will after hearing this track. Burks gives the various melodies a lot of personality and in the process, interjects himself into the music. Funny, a little zany and very endearing, this was a perfect track for him to tackle. It’s great! “Fishing Hole” is another wonderful piece. Arranged by Jake McCoy, this track swims through the ears with a relaxing atmosphere and great tempo. Papeghin and McCoy add a splash of color to give this track its refreshing quality. One of my favorites! Ashburn, McCoy and choir return once again with this darker and subtle rendition of “Gerudo Desert.” The brass and choir provide the main basis for the cue which ends on a haunting note.

Finally, disc 3. For me, yes, I love the disc and set as a whole, but it does not get any better than the final five tracks. I’m saying that lightly either. The album has been building for the past few hours and we finally come to “Throne of the Demon Thief,” “Blood, Spirit, and Hatred,” “Dark Lord Ganondorf,” and “End Credits Parts I and II.” These final tracks are some of the most dense and complex music of the set. Pulling out all the stops with a 29 minute thematic driven, brass heavy orchestral onslaught, with Skyrim-like choir moments, this is a roller-coaster you’re not going to want to get off. “Throne of the Demon Thief,” “Blood, Spirit, and Hatred,” “Dark Lord Ganondorf,” perfectly encapsulates Link and Ganon’s epic battle. It just keeps building and upping the ante until the awesome end. You’ll need to actually take a breather after these three cues, it’s that big in scope! Wrapping up the set is of course “End Credits Parts I and II.” If you’re not smiling and in a good mood after “End Credits, Part I” then you need to have your hearing checked. One of the most beautiful cues on the set, including an awesome performance of The Legend of Zelda title theme. Turn it up! Loud is the only way to listen! Finally, it’s hard to not compare the finale that is “End Credits, Part II” to what Chad Seiter did on Symphony of the Goddesses with his finale in the Twilight Princess movement. However, Zelda Reorchestrated manages to rise to that level of grandness and absolutely knocks the ending out of the park. If you’re not misty at the end of this final track, you’re listening to it wrong!

It’s been a long journey for Zelda Reorchestrated, and it’s paid off. I’m so proud of you guys! This is not only a AAA title, but already one of my favorite scores of 2013…and it’s only a few weeks into the new year! I know that Zelda Rechorestrated’s fan base has been waiting five long years for this. Some have given their complete and unending support, while others have not. To all the fans, listeners, and naysayers, you’ll be absolutely blown away. This will be a title that you’ll come back to again and again. No one can say there’s a shortage of love and talent pouring out of this album. This was made for fans, by fans and it shows in the final package. I hope one day that Shigeru Miyamoto, Takashi Tezuka, Eiji Aonuma, Toru Minegishi, Asuka Ota, and of course Koji Kondo get to hear this. I think they’d be proud that their universe inspired this kind of passion, creativity and drive of everyone involved.

I know I’ve been rambling long enough! But please, heed my final thought…

…Don’t go alone, it’s dangerous out there! Take some good headphones, and let the music take you on the grand adventure that is Twilight Symphony! 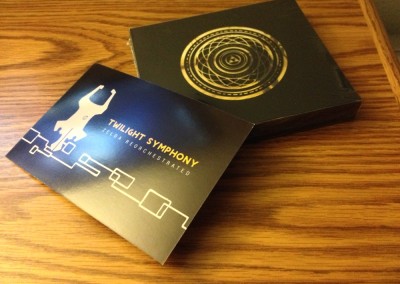 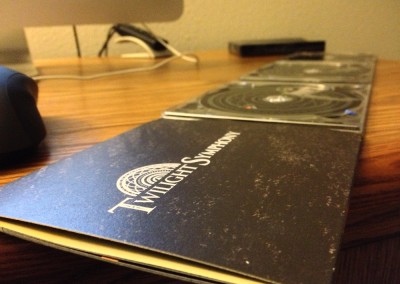 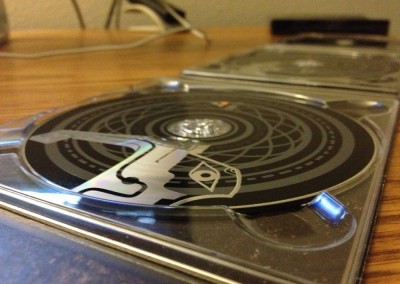 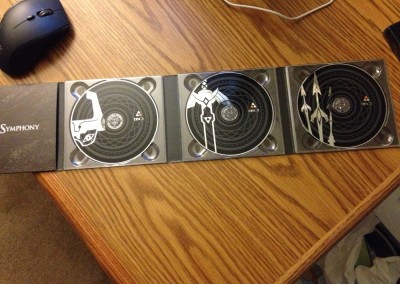 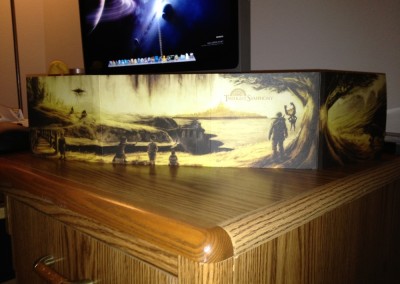 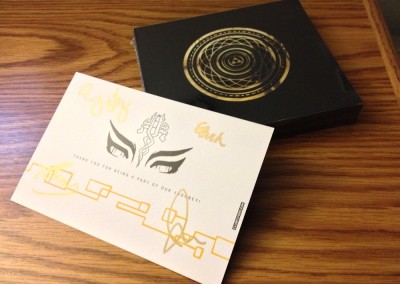 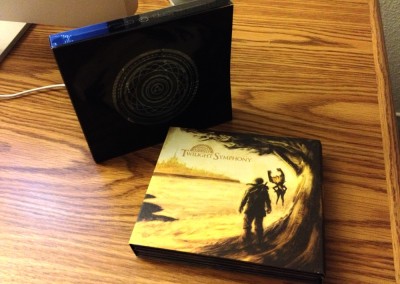